I think I’m correct in saying that several months ago the kerb at the junction of Strawberry Vale and Waldegrave Road was realigned with the result that the cycle lane that had previously continued up to the stop line was cut short at the point where the kerb was realigned. Photo 1341 -1 shows this quite clearly. I cycle along this road fairly frequently and had recognised this as a dangerous point for a cyclist but did nothing about it other than taking care. On Monday however my alertness paid off as a large lorry overtook me about 8 – 9 metres back from the stop line. Had I not braked hard it would have undoubtedly have hit me. The alignment of the kerb creates a pinch point which a cyclist is funnelled into without any warning.

It appears to me that the needs of cyclists have been ignored in the redesign of this junction and that a road safety hazard has been created. 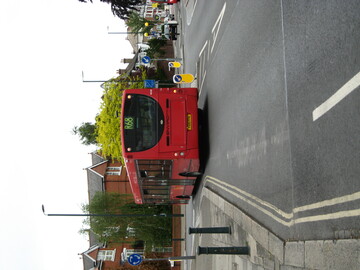