I have serious concerns about the safety of this portion of the bike path; arising from its recent re-design. Recently my 10 year old son was in a very close “near-miss” with a car turning off the A316 into Bicester Road; and I believe many more similar incidents are likely occurring. Eventually someone will be seriously hurt or killed on it.

However, the improvement in the track leads cyclists to feel more confident in using it – giving a false sense of security.

In particular:
• The segregated track makes it particularly appealing for inexperienced and more vulnerable cyclists (such as kids).
• This track design leads to an increase in the cyclists speed.
• The smooth/quick nature of the track leads inexperienced cyclists to believe that THEY HAVE RIGHT OF WAY across side roads.
• There are no markings on the roads to tell drivers coming in or out of side roads that cyclists could be on the track crossing their path.
• There is a particular challenge for EASTBOUND cyclists.

To avoid stopping at every side road, when on the track travelling Eastbound (as per red arrow on photo) approaching roads such as Bicester road, the cyclist has to simultaneously
(a) check to their FRONT/LEFT side to see if a car is exiting the side road
(b) check BEHIND them on their REAR/ RIGHT hand side to see if a car is about to swing off the A316 into the side road (usually at speed) - (as per orange arrow on photo).

This is a hard combination to perform – looking 180 degrees opposite directions at the same time. If you are an inexperienced cyclist, on an apparently safe track, it is very likely that you will not realise you have to be this vigilant and not check adequately for cars.

Hence, my boy rode across Bicester road from the east and was very nearly hit by a car turning off the A316.

(Note that travelling from the west is somewhat easier as both the vehicles turning in from the A316 and those turning out from the side roads are in your front field of vision).

My suggestions for improving this situation are:
(1) Clearly mark the bike track across the side roads so cars are aware there are cyclists approaching from the side.
(2) Ideally, give cyclists priority across the side roads; so making cars slow to a halt and making it more intuitive for cyclists.
(3) To facilitate this, would require some stopping space for traffic coming on/off the A316 to after the bike track crossing

At roads such as Bicester road the bike track could be curved to the south by about 2m before crossing the side road – this curve in the track would
(a) naturally slow cyclists down as they approach the side road
(b) would provide vehicles moving onto the A316 a decent gap so they can separate the concerns of first negotiating the bike track then focus on getting on the A316;
(c) for vehicles coming off the A316 the additional space would give them space to stop and give way to cyclists. 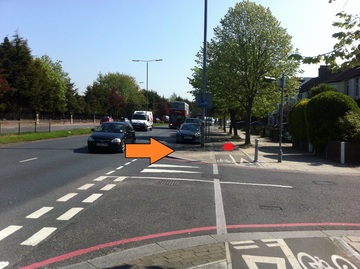