Final proposed route of the Harrow Quietway. The Quietways programme commenced under Mayor Boris Johnson aimed to build a cycle route in each borough, predominantly on quieter roads. Ideally these should be roads along cyclist desire lines from which through motor traffic has been removed. However, many of them have been substandard, either because they follow busy roads or are indirect.

The proposed route has changed several times (see http://harrowcyclists.org.uk/consultations/tfls-wiggly-quietway-for-harrow-june-2015/) and this is the final version.

The sections along Station Road and George Gange Way use existing segregated cycle paths, and the remaining sections are along minor roads with some changes to junction geometry and parking restrictions, but no new restrictions on motor vehicle movement. The toucan crossing of Kenton Road will move about 100m to a more convenient location, and there will be new lighting along the path in Byron Park and the Belmont Trail. 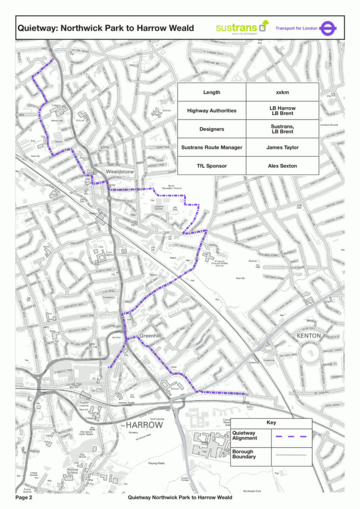