TfL overview
We are proposing a number of changes at Hammersmith gyratory, King Street, Beadon Road and Hammersmith Road as part of our Road Modernisation Plan, in partnership with Hammersmith & Fulham Council (H&F Council).The proposals aim to deliver a safer and more direct east-west cycle route through Hammersmith town centre.

What are we proposing?
We are proposing to create a direct, kerb-segregated two-way route for cyclists across the northern side of the gyratory, with separate cycle signals to protect them from traffic. This would remove the need to cycle round the gyratory, mixing with fast-moving traffic, and break a key barrier to cycling in west London.

To improve conditions and safety for cyclists we would:
- Provide a segregated two-way cycle track on the north side of Hammersmith gyratory. Cyclists would be physically separated from traffic by a kerb. We would make room for the cycle track by reallocating space from some sections of the wide pavement on the south side of the road
- Separate cyclist and motor vehicle movements at junctions; cyclists would have their own traffic signals which would be green at different times to those for motor traffic
- Extend the eastbound contraflow cycle track on King Street to allow cyclists to reach the gyratory from Hammersmith Town Hall without having to follow Studland Street, Glenthorne Road and Beadon Road. The cycle track would be ‘stepped’, meaning it would be at a height between the road and footway, and become physically separated with a kerb east of Lyric Square. We would make room for the cycle track by reallocating some space from the pavement on the south side of King Street
- Provide a short two-way section of cycle track on Queen Caroline Street to allow access to Black’s Road and Hammersmith Bridge Road
- Enable cyclists to pass through the island at the junction of Hammersmith Broadway and Butterwick, and increase the size of the island to accommodate cyclists and pedestrians

We would also make the following changes in the area:
- Provide a new bus lane on Beadon Road, between Glenthorne Road and Hammersmith Broadway
- Remove the pedestrian crossing between the south side of Hammersmith Broadway and Shepherd’s Bush Road to allow for provision of the segregated cycle track
- Install pedestrian countdown signals at the crossings of King Street, Beadon Road, Shepherd’s Bush Road, Queen Caroline Street, Hammersmith Broadway and Butterwick
- Widen the footway on King Street where possible to provide more space for pedestrians in this busy area
- Raise the carriageway to footway level on King Street opposite Lyric Square to make crossing more convenient for pedestrians and encourage slower motor vehicle speed
- De-clutter pavements by rationalising locations of street furniture
- Increased cycle parking
- Relocate one loading bay and two disabled parking bays on Black’s Road to provide space for additional taxi rank spaces

Why are we proposing this?
TfL is investing £4bn in the Capital’s vital road network to ensure London’s roads are able to meet the needs of a growing population. As part of this plan, we are reviewing junctions and gyratories across London to make them safer for all road users, including cyclists, and to make journey times more reliable. Hammersmith gyratory is used by many cyclists each day, and can be an intimidating place to cycle. Hammersmith is one of the Mayor of London’s 33 priority “Better Junctions”.
H&F Council’s cycling strategy sets out an ambitious plan to increase the number of people cycling in the borough to reach eight per cent of all journeys. Part of this plan is to deliver a segregated cycle route along the A315 corridor, a key commuter route for cyclists. Hammersmith gyratory lies on this route.
We are proposing to give cyclists dedicated space and separate cycle signals at junctions on the northern side of the gyratory. This would offer cyclists a more comfortable and direct route between King Street and Hammersmith Road, bridging the gap in the proposed A315 cycling route that the gyratory currently creates.

Impact on buses
Beadon Road is narrow and carries a high volume of buses and general traffic. To reduce delays currently experienced by buses approaching the gyratory, we would provide a new bus lane on Beadon Road between Glenthorne Road and Hammersmith Broadway, replacing one of the two general traffic lanes.
We also would need to relocate bus stop Z5 on the gyratory, which is currently used for emergency purposes only, to Butterwick.

How would bus and traffic journey times be affected?
Our proposals would affect some journey times through the area. In the main these changes would not be significant, with some bus and general traffic journeys getting shorter and some getting longer. The most notable increases in journey times will be for traffic approaching Hammersmith gyratory from Fulham Palace Road in the morning and evening peaks.

Impact on other road users
We propose to relocate the position of one loading bay on Shepherd’s Bush Road, with the existing dimensions remaining, in order to allow for an increase in the size of the existing taxi rank.

How does this fit in with the wider plans for Hammersmith town centre?
TfL and H&F Council are working together on ambitious plans for a long-term transformation of Hammersmith town centre.
We are proposing shorter-term improvements to improve safety and connectivity for existing cyclists and support the Council’s cycling strategy to increase the number of new cyclists in the area. This plan is separate to, and does not affect longer term proposals for the area, however these proposals would be integrated with any future schemes.

Delivery of the wider A315 cycling improvements
TfL and H&F Council are also working together on plans for an east-west cycling route along the A315. Plans for this route either side of Hammersmith gyratory are currently being developed, with public consultation planned to take place later this year. 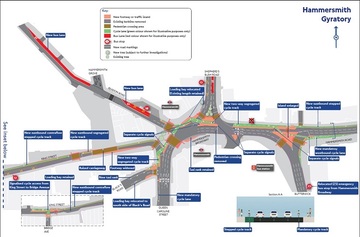